The figure of Guglielmo Embriaco, the great naval and architect leader, called “Head of Maglio” – “Caput Mallei”, is recalled and exalted by the group of figures of the historical procession of Genoa.
The Embriaco, son of Guido Spinola Viscount of the Manesseno branch, was born around 1070. His fame shone as a crusader conductor, so that he was sung by Tasso in “Free Jerusalem”.
He left with his brother Primo di Castello, driving the second Genoese expedition for the Terrestrial, and subsequently led a third shipment consisting of 26 galleys during which he succeeded in forcing the city of Santa, 15 July 1099, and conquering Cesarea and Tire in 1101 With devices he designed.
Just in memory of this historic undertaking, William Embriaco, who when he returned to Patria received the title of “Consul Exercitus Januensum”, brought the “Sacro Catino”, which, according to the tradition taught in Palestine, Jesus used during the Last Supper to eat the lamb Easter.
The Genoese hero is the city’s gonfalone, with the coats of arms of the eight old Genoa Companions – Porta, Maccagnana, Borgo, Castello, San Lorenzo, Piazzalunga, Portanuova, Soziglia – a fanfare of 6 trumpets and 6 drums, standard bearer and captains: It was a particularly exciting time for the Embriaco, who with his followers of Captains and Alfieri with the Vessilli of the Homes – Fregoso, De Fornari, Grimaldi, Pallavicini, De Nigro, De Marini – goes to the Cathedral of San Lorenzo To lay down the sacred relic, where it is still guarded with the Ashes of the Baptist, taken from the Genoese crusades to Mira in Licia.
An armed warrior of a big sword is ahead of the catwalk and immediately after the Alfiere with the Emblems of the Embriaco and a page supporting the leader’s sword, pave the way to the legendary “Maglio Head”, followed by the Annals Caffaro of Rustic, Lord of Caschifellone.
It closes the procession a delegation of nobles and people in the typical customs of the time, preceded by a swarm of swordsmanships, crossbowmen, crusaders and spear armed. 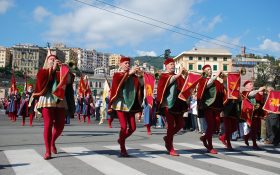