THE HEROINE AND THE BELLS

Kinzica de’Sismondi according to the legend, in 1044 A.D. saved the City form the attack of the Saracens (who at that time used the strategy of surprise night attacks). She woke the Consul and had the bells rung to call the soldiers and to warn the population of the great danger that threatened the city. The Saracens on seeing their plan discovered and discouraged by the resistance of the people of Pisa took to their boats and returned to Sardinia (according to local history).

The young girl became a popular heroine and is placed in the centre of the procession, which represents the highest Orders of the Maritime Republic at the apex of its greatness. This was
before the unhappy battle of Meloria (6th August 1284 A.D.) when the great naval power of Pisa was overpowered by that of Genoa. In the front of the procession is the Potestà (the highest authority of the City) and then the Captain of the Judges, the Senators, the “College of the Elders” (that made up the government and nominated the magistrates), the Captain of the population, the Consul of the Merchants corporation, the Prior of Minor Arts, the Admiral of the Fleet, the Consuls of the Sea and the Head of the Corporations of the Arts. The procession in made up of eighty people in historical costumes. 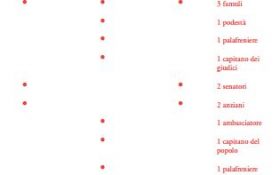 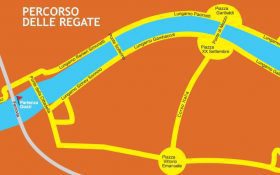 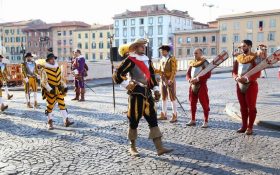